Get invited to future events

In this hands-on workshop, you will experience the front-end (React-based framework Gatsby) and the back-end environment (DevOps ddev + Drupal) for developing web services. Gatsby and DevOps ddev are compatible with WordPress and can be used in the same way.

The course will focus on CMS (Drupal), an open source development of API-First and modern web services and systems connected to 5G. This seminar is for system engineers, web system developers and business marketing people, and web front-end engineers.

You can understand that you can use the advanced content database management and API-First function to link with other systems and build a front end.

Information exchange with beer, wine and snacks from around 18:00

We look forward to your participation  This Camp Website here 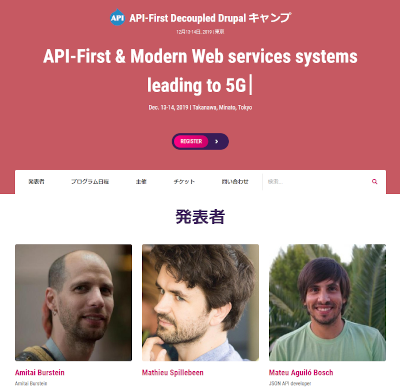 APIs for various systems (a mechanism for calling functions of another software from one software) have been released, and API-First is a mechanism that can provide new services quickly by combining those APIs through the Web. It has become a high-value-added ecosystem, and has been adopted for “API economy” web services such as dispatch services using mobile devices.

What is Decoupled 、Headless CMS

Decoupled and Headless CMS mean that the CMS is used only as a back end and the front end is built on a system other than the CMS using technologies such as REST API. A common CMS is called “Coupled”, and a content management application (CMA) and a content delivery application (CDA) are integrated. It corresponds to the structure of a blog or a conventional homepage. The case where the CMA and CDA are separated is called “Decoupled”.

As an open source CMS, it is a highly functional, modular / building block type, scalable system used by governments, universities and companies around the world. In particular, the content type and views function can easily build and manage the data structure of content, and the view function that extracts, displays, processes, and inputs / outputs the data in the SQL language can be easily combined with other systems using the JSON API module. Can be linked together to build a front end.

An open source DevOps that supports Drupal, WordPress, TYPO3, and backdrop, an open source CMS based on PHP. DevOps can be linked from the local environment of development to the live environment to be released. In the ddev environment, all the software necessary for development, such as Linux OS, database, Web server, PHP language, CMS, etc. are installed in the Docker-based container, so you can start development easily.

GatsbyJS was born in 2015 as a React-based website construction framework, and since 2018, CMS (Drupal, WordPress, etc.) can be used as a back end.

Probably the first full-scale hands-on training by Gatsby in Japan.

This event is based on Drupal Code of Conduct of the open source CMS Drupal community.